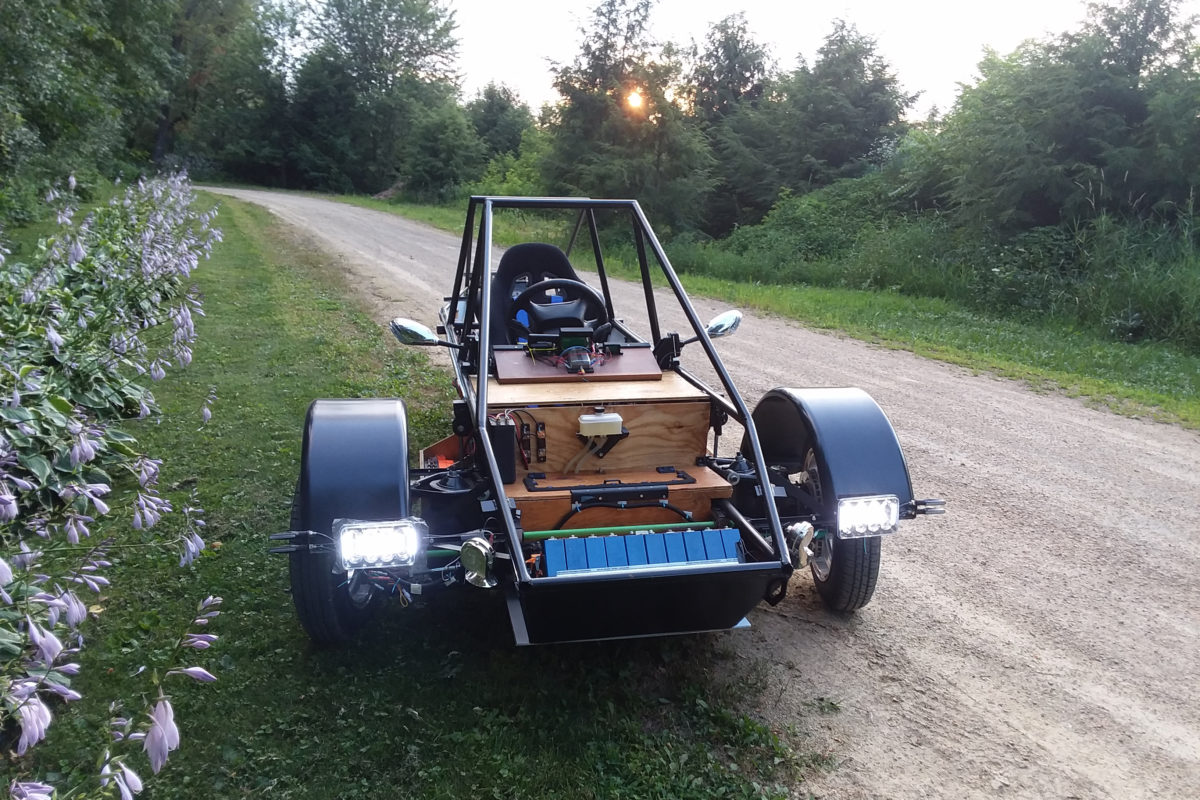 The main Achilles heel of the EV is the main battery bank. It is expensive, heavy, a potential hazard, the main limiting factor for performance and vehicle range. As with any vehicle, adding more weight means you need more power to move that extra weight (batteries in this case). So, as you add batteries you get diminishing returns. I thought it would be a great, if not fun, idea to minimize battery need by constructing a small vehicle. This idea was inspired by driving go karts when I was younger. A street legal go kart, sounds fun doesn’t it?

In April 2018, I decided to throw caution and financial responsibility to the wind and start building my own small EV autocycle. It’s basically a three wheeled car. Though, as far as the DMV is concerned it’s a type II motorcycle. This is because it has three wheels and weighs less than 1500 lbs.

I had a general design from the beginning, but the precise proportions came about in a more organic fashion. Starting with the seat, steering column, and steering rack, I figured out the best spacing for driver comfort. Since I was the only intended driver, this was straight forward. Next, I did some rough calculations for battery need and space requirements. This determined how much space in front of the steering rack was needed for battery storage. Initially, I mocked up the chassis proportions using available stock material. After making sure everything would fit, I started cutting, along the way measuring and triple checking before welding. We all know the saying: “measure twice, cut once”. I find it wiser to measure three, four, or more times before cutting or welding.

The chassis is made from aircraft grade chrome molly 4130 tube stock with unnecessarily thick walls. This, along with the Mustang II IFS, makes the chassis a bit overbuilt. About 15 years earlier I did a few concept sketches of this one-seater car concept and its round smooth contours reminded me of a bullet. So I initially named it “The Bullet” as a placeholder/ project name. I assumed a better name would pop up at some point. A friend and mentor of mine adds the word “Acme” on all his metal castings, mainly as a reference to Looney Tunes. I feel this project is a bit looney and has Wile E. Coyote type calamity possibilities; something equivalent to a giant anvil being dropped on the car or it is careening off a cliff. So now the name has evolved to “The Acme Bullet” and this name has basically stuck. 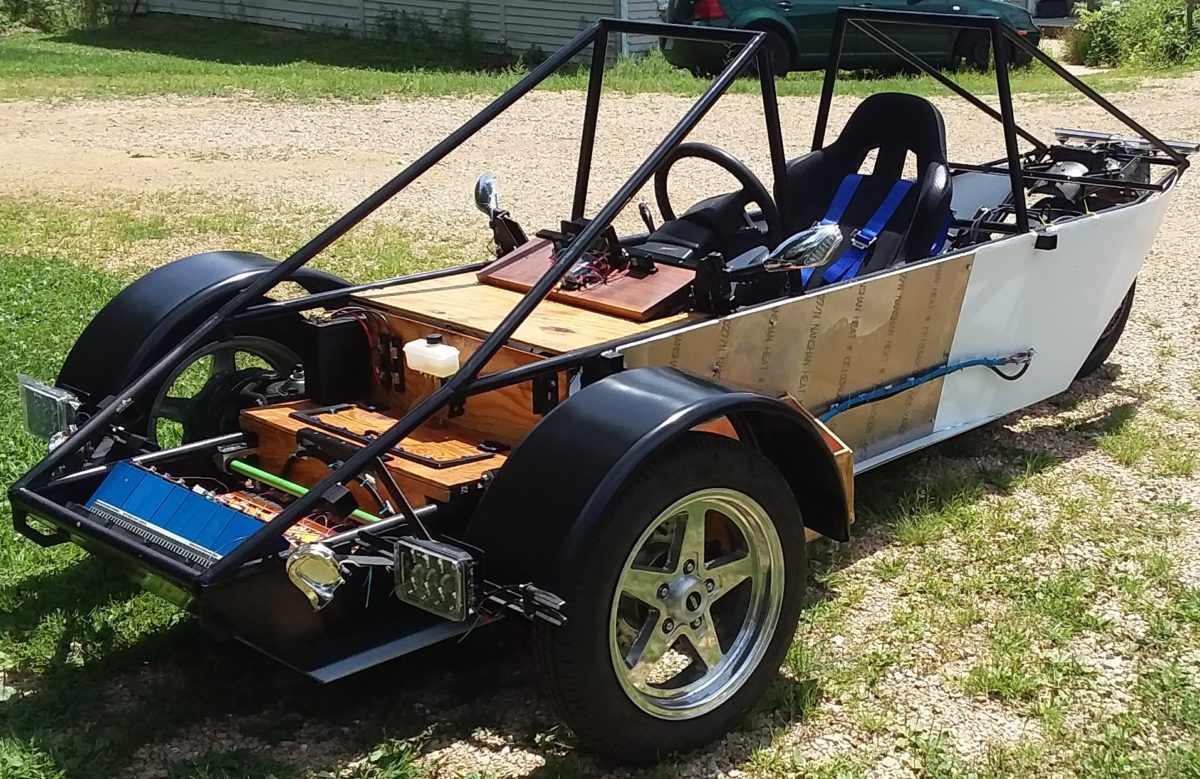 While it is currently operational, it is still a work in progress. I still need to design and build the body, canopy, windshield, and a couple small sub systems. Range anxiety is a real thing, so I reluctantly decided to make this a hybrid using a small, single cylinder engine.

A rough calculation, using the motor torque and mass of the car, shows this autocycle should accelerate 0 to 60 MPH in less than eight seconds. I would agree that 0 to 60 MPH in eight seconds may sound a bit undramatic. Keep in mind that electric motors have most of their torque (twisting force) at the low end of their RPM (speed) range. This means that the low-end acceleration, for example from 0-30 MPH will indeed be dramatic. The maximum acceleration will decrease as the speed increases. I can confirm both facts since I have verified the vehicle at various velocities. An internal combustion engine has peak torque at higher speeds which gives them more impressive horsepower ratings. Since power, in this case “horsepower”, is force multiplied by speed. This torque curve characteristic also makes internal combustion engines superior for passing power. On the other hand, the Acme Bullet can operate without a transmission because of the bottom end torque of electric motors, thus making the construction much simpler.

There are many little details having nothing to do with the performance of the car, but they contribute to the character. The dashboard is made from black walnut cut and milled 100 years ago in south west Wisconsin by a friend’s grandfather. All the plastic 3D-printed parts were designed by me and printed with my homemade, 3D-printer. There are several parts salvaged from previous revisions of EV projects. Some metal parts are casted using my homemade metal melting furnace that I built from free parts. Several chunks of metal have had past lives as test fixtures, component brackets, engine parts from the Golf, or other assemblies with histories. I like the idea of functional art and things with depth behind them.

I had the Acme Bullet inspected on July 23rd, 2019. Both the state patrol inspector and his trainee where amazed during the entire inspection. “I have never seen anything like this in 27 years of inspecting homebuilt motorcycles” the inspector said. His trainee called it “ingenious”. I’m not sure about ingenious, but it passed inspection with no problems. Now I await the VIN plate, then a second inspection to confirm that I attached the VIN plate. after the second inspection, I receive a title and a license plate. The wheels of bureaucracy turn slowly, but they do turn.

The inspector in training asked, “what is with the light bulb near the rear of the car”. This idea I unfortunately cannot take credit for, but all my larger EV’s have one. The purpose of this light is to decrease the current that is going through the main power relay. When a relay is first energized, it needs to pull in a set of contacts. Initially, the relay needs a lot of power to get this started, but after the contacts are pulled in, there is very little power required to keep them there. Luckily a typical incandescent light bulb works excellent for this application, in this case a 15W light bulb. At first the light bulb looks electrically like a short (little or no power is lost or limited); all the power goes to the relay coil. After a fraction of a second the bulb warms up and starts dropping voltage, limiting the current, and thus reducing the power to the relay. This enables the relay to work effectively but remain cool and consume less power. As a bonus, it also acts as a power indicator. On the downside, none of my EV’s will work if the light bulb burns out. I suspect there is a metaphor here, but I haven’t figured it out yet. Perhaps it’s a metaphor for continuous learning and when the light bulb burns out, like the car, I’ll be dead. 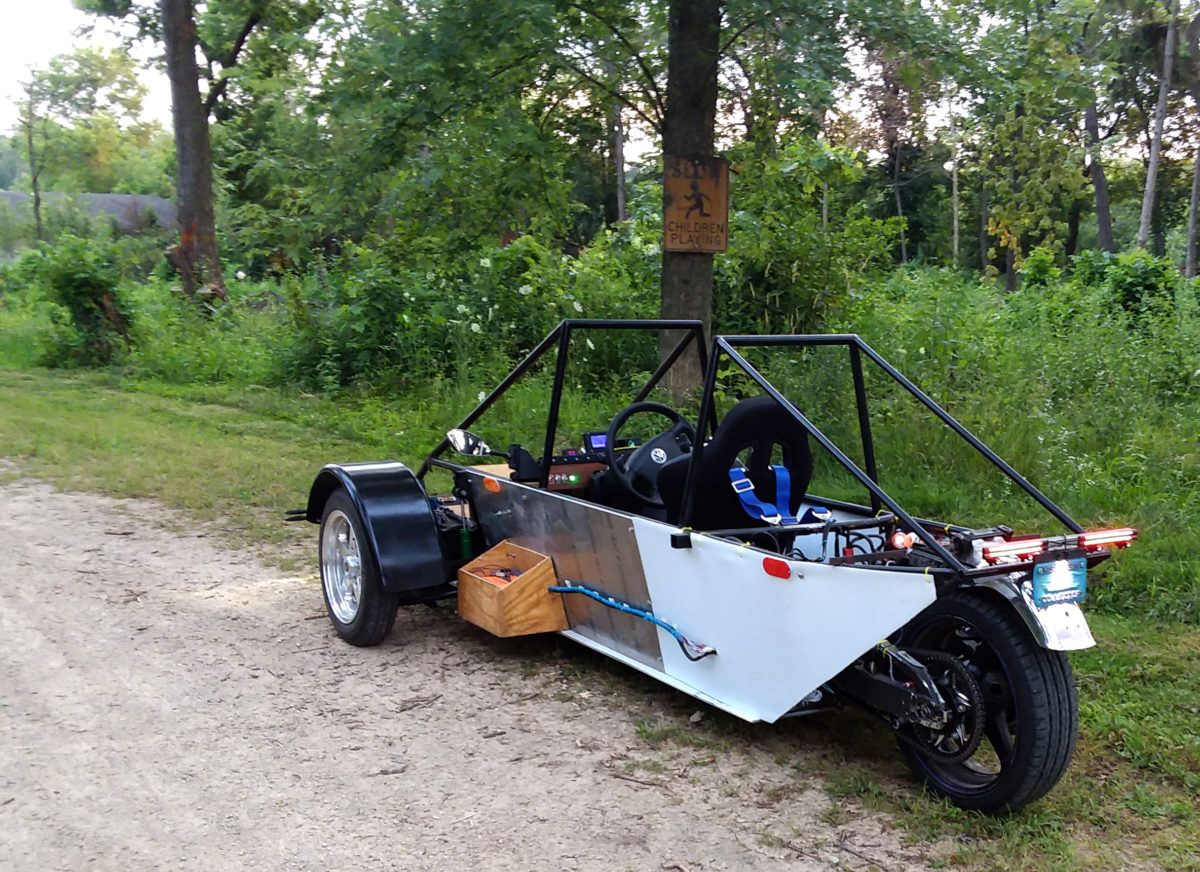